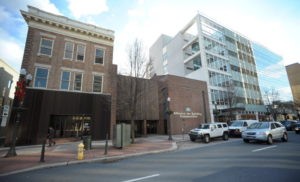 Alvin H. Butz Inc. has been given the green light to expand its Allentown headquarters building, a move expected to bring up to 200 more jobs to the city

ALLENTOWN, PA— Allentown gets another quarter-billion in development downtown
Allentown’s mayor is under investigation by the FBI and its top development director is leaving, but the building downtown continues at an almost runaway pace.

The Allentown Neighborhood Improvement Zone Development Authority Wednesday approved a quarter-billion dollars worth of new projects expected to bring more than a thousand new office workers, hundreds of college students and more than 400 new residents into the city’s urban core.

During the authority’s busiest meeting since it was formed in 2012, the board agreed to allow NIZ tax incentives to be used to help build the $200 million Five City Center office and apartment complex, the $20 million Strata II apartment building, the $17.7 million Butz office building and the relocation of a cigarette warehouse. There’s already been $1 billion worth of development in the zone.

The Five City Center project, in particular, excited city officials who, for the first time, learned it could include as many of four floors of space used by area colleges offering business classes focused on entrepreneurship and innovation. Three of the four projects approved are being done by City Center Investment Corp. To fund it, City Center CEO J.B. Reilly announced his revolving line of credit for NIZ projects with a dozen local banks, lead by National Penn, has been increased from $185 million to $325 million — a credit increase also approved by ANIZDA Wednesday.

“I think this demonstrates that the FBI investigation is not going to stop the momentum we’ve built,” ANIZDA Chairman Sy Traub said. “It has not slowed us one bit. A lot has been done the past three years, and this shows that a lot will continue in the coming years.”